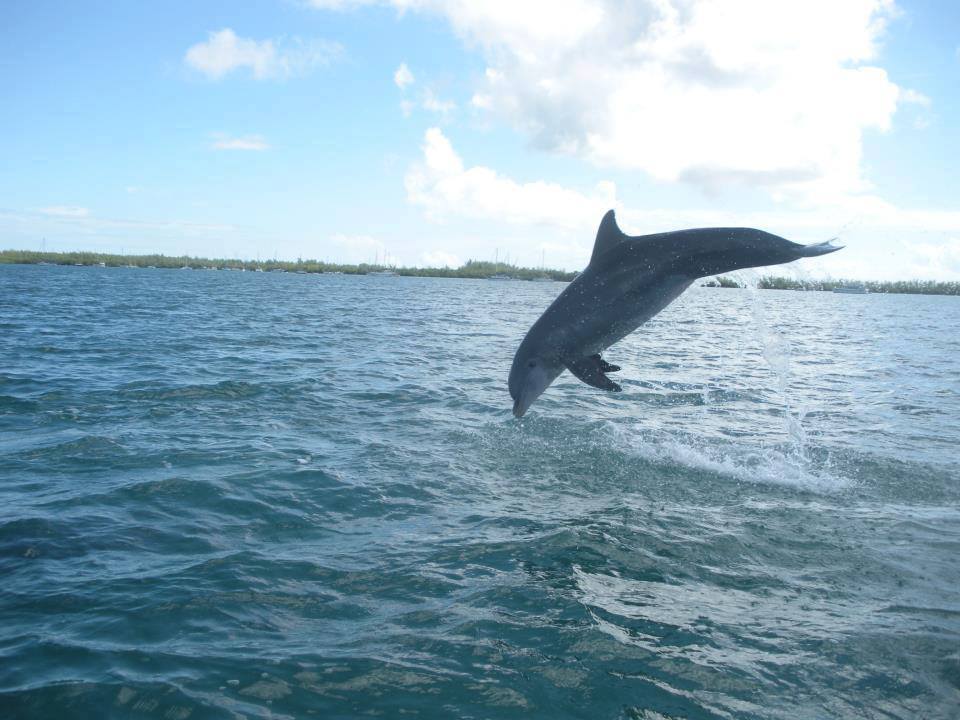 Dolphins and their closely-related marine mammal cousins, whales and porpoises, descended from terrestrial mammals that began living in the water about 55 million years ago in the Eocene epoch. Now, about forty species of dolphin live in the shallower continental shelf waters of oceans worldwide. Adult dolphins vary in size from about 4 feet in length and 90 pounds in weight, to 30 feet and 10 tons in the case of the Orca, or killer whale, which is a member of the dolphin family. All dolphins live in family groups called pods, eat mostly fish and squid, and bear live young called calves. Dolphins are among the most intelligent animals on the planet.

The dolphin species most people are familiar with from TV, movies, and aquarium shows is the Bottlenose Dolphin. These are large, gray-colored dolphins that have a relatively long, pointed snout, with an upturned mouth profile that gives them a friendly, smiling appearance. Bottlenose dolphins are found all over the world and, while some pods are migratory, others will inhabit a specific area year-round. Key West is home to a resident pod of about 300 Atlantic bottlenose dolphins, which live in smaller pods that can range from 6 animals to 20 or more seasonally. The Key West dolphins are very popular with visitors and locals alike, and watching them in their home environment is an exciting day trip activity because these dolphins are fairly accustomed to interaction with humans, and are playful and friendly with people who politely and respectfully visit them in their blue water home.

In the summer, when the water is warm and clear, the Key West pod is usually easily found a few miles off the Gulf-side shoreline in a shallow patch of water called the Dolphin Playground, a large sandy area about 10 to 15 feet deep where the dolphins spend the day hunting for fish, playing, and socializing. Spring and summer are the peak of mating season, and a large influx of migratory dolphins increases the size of the resident pods at this time. In the winter months, when the water is rougher and not as clear, the pods move to within a few hundred yards of the island, making year-round dolphin watching possible in Key West. In either season, an offshore boat trip like the Key West Dolphin Watch will offer the best chance of enjoying an encounter with wild dolphins in their natural habitat.

When taking a trip out to see the dolphins in Key West, remember that dolphins are highly intelligent, sensitive creatures that were living in the area for millions of years before the arrival of humans. They lead rich lives within family and community groups, and their activity patterns and living spaces must be respected. Wild dolphins may engage in many different activities within a short period of time. For example, it is common to see playing, feeding, mating, and sleeping behavior all within less than an hour’s time. This is why your tour captain may sometimes keep the boat at a distance at one point then move closer later on. On some tours, you may even have the opportunity to get in the water and snorkel with wild dolphins. Dolphins are spontaneous creatures, so it is best to be prepared for anything. Here are a few tips for a successful dolphin-watching trip:

Bring appropriate clothing for the weather and for sun protection.

Wear a swimsuit or clothing that you do not mind getting wet. Even if you don’t get in the water, you can still get splashed.

Bring your camera – an underwater model is great for splash-resistance and snorkeling alike. Binoculars are nice to have as well.

There is a well-established protocol for watching or swimming with wild dolphins. Feeding, touching, or any type of aggressive behavior, including in the operation of boats or watercraft around them, is completely unacceptable at all times.