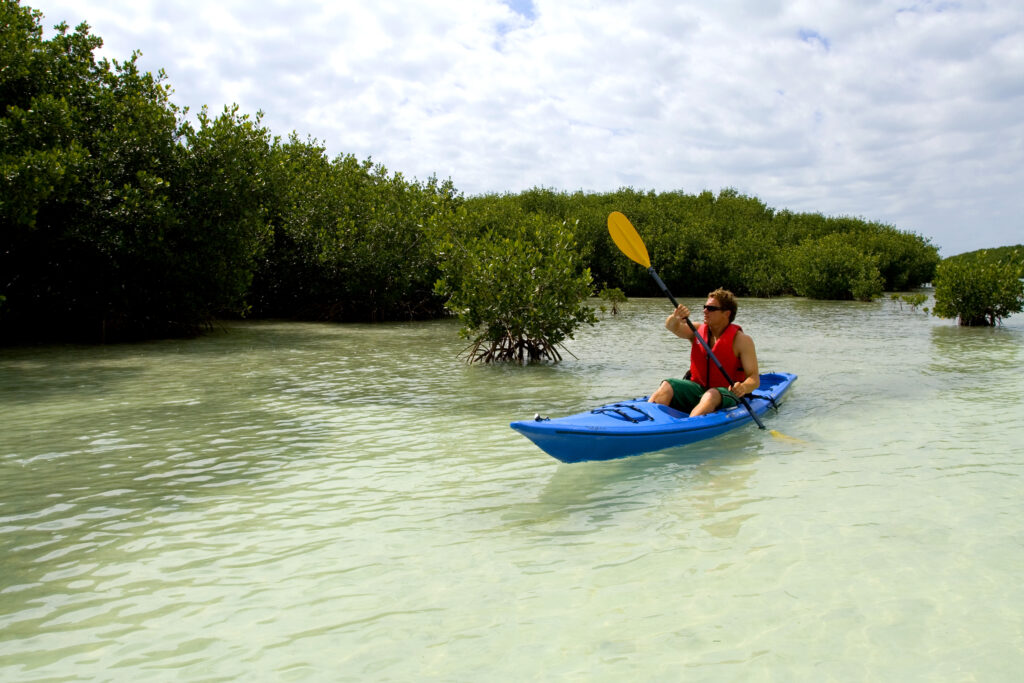 The waters around Key West offer visitors a chance to explore the only subtropical coral reef marine environment in the continental US, along with hundreds of square miles of shallow inshore clear-water flats, mangrove islands, channels, and passes to the open waters of the Gulf of Mexico. Sea kayaks are an ideal way to get out into this environment on a Kayak Eco-Tour that will let you observe the many life forms present in and around the Key West waters. The modern touring kayak is stable and easy for a beginner to handle on a first attempt, and it is a craft that puts you close to the water and moving silently, allowing for close approach to and good viewing of birds and marine life. Kayaks also have a small profile and shallow draft that allows for poking around the aquatic nooks and crannies that abound around Key West and cannot be reached by any type of powered sightseeing craft.

The sea kayaks plying Key West waters today trace their heritage back at least 4000 years to the boats originally built and used by native hunters in Alaska, northern Canada, and southwest Greenland. These Eskimo hunters needed boats that were light and portable, yet strong and stable enough to take to the sea after seals and walrus. The earliest models used a light wooden frame joined together with sinew or baleen and covered with sea lion or seal hides. Today’s sea kayaks, often seen in bright primary colors like yellow, blue, and green, are made from rotomolded plastic. This manufacturing technology first appeared in 1984, and it produces a watercraft that is low-maintenance, extremely durable, and almost unsinkable.

Like their older forerunners, modern sea kayaks or touring kayaks are boats developed for paddling on the open waters of lakes, bays, and the ocean. They are seaworthy small boats, ranging in length from 10 to18 feet or longer for tandem craft, made for ease of straight-line paddling, decent cruising speed, cargo capacity, and comfort for long journeys. Most of the sea kayaks in use around Key West are the newer sit-on-top style, which are more versatile and much easier to get in and out of than the traditional kayak design in which the paddler’s lower body and legs are placed inside the boat. There is no need to worry about being somehow trapped in the kayak should it tip over as this is impossible with a sit-on-top boat. In fact, tipping over is a chance for a cooling dip and is part of the fun of sea kayaking.

A Key West Kayak Tour will take you out among the mangrove islands and coral patch reefs, where you will experience a close-up view of birds like the egret and white heron, as well as many exotic migratory species that pass through the Keys. Looking down through crystal clear water only inches deep will reveal an amazing underwater world of crabs, conchs, sea-urchins, colorful tropical fish, and many other dwellers of the mangrove islands and channels. Deeper waters offer chances to spot sea turtles, rays, dolphins, feeding seabirds, and a variety of other species. All of this while enjoying a very quiet and peaceful glide across the water that also includes a bit of good exercise. For an even closer look at the Key West marine life, combine a kayak trip with some Snorkeling – two great ways to get in some human-powered exploration of the natural beauty that the Key West inshore waters are famous for.