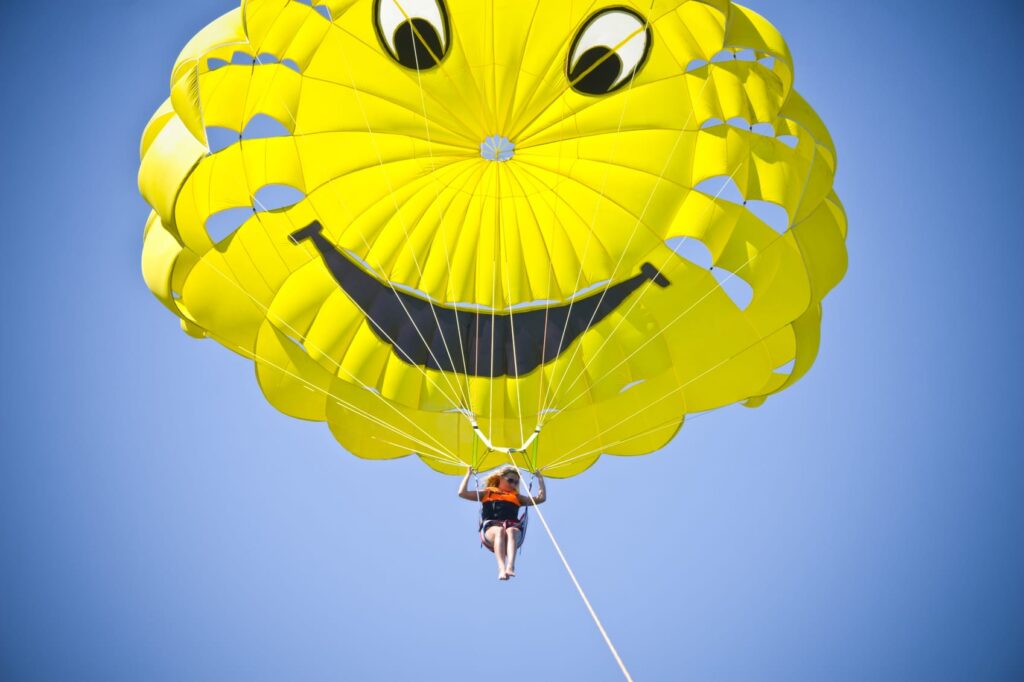 When visiting the shores of Key West or other beach resort areas around the world, it is now common to look off shore and see a brightly-colored parachute that seems to hover above the water while moving slowly forward. If you look more closely, you will see a boat cruising along below and slightly in front of the chute, with a tow rope reaching upward to the parachute. What you are seeing is parasailing, a fun thrill ride above the water. It is a recreational activity that has exploded in popularity at coastal resorts around the world and even on the larger lakes in some regions.

Parasailing is a relatively simple activity. It involves using a specially-designed parachute-like canopy, called a parasail wing, to ascend into the air while being towed behind a vehicle. While most familiarly done behind a boat, in Europe, 4-wheel drive vehicles are also used to power parasailors aloft. The parasail is attached to the tow vehicle with a line, while the rider is secured to the chute with a harness arrangement that has a seat attached. The forward motion of the tow vehicle forces air into the wing, which inflates and climbs into the air as it is pulled forward.

Modern parasailing has its origins in the work of Pierre-Marcel Lemoigne, who developed the first ascending-gliding parachute in 1961. Lemoigne was working to develop a method for training parachutists that would allow trainees to practice multiple descents and landings in rapid succession without the expense and difficulty of going aloft in an airplane. The idea was to tow the parachutist to altitude, then release the line, allowing a descent to landing. The method proved successful, and in 1963, Lemoigne licensed his idea to Jacques-André Istel of the Pioneer Parachute Company, which began to manufacture and sell an ascending-gliding parachute that was trade-named the “parasail”.

Parasailing and the related paragliding were initially more popular and widespread among European sports enthusiasts than they were in the US. The major breakthrough that really opened the sport to the non-parachuting public in America and around the world came in 1974 when American Mark McCulloh invented the first self-contained parasail launch and recovery boat, called the Winchboat. The craft featured a flight deck platform for riders to takeoff and land on, and a winch and mast system that efficiently attached the parasail to the boat and allowed it to be launched and retrieved at will. This system replaced the beach takeoffs and water landings that had restricted the sport to fairly athletic, adventurous individuals.

With advancements in tow-boats, parasail canopy designs, and tow rope/harness setups, parasailing has become a very safe and accessible thrill that has been enjoyed by millions of riders around the world. Increased towing power and improved harness design now allow for two and even three riders on one parasail. Along with these design improvements, more safety standards and operating regulations have also been implemented to reduce the risks associated with parasailing.

A visit to Key West is the perfect opportunity to enjoy some thrilling Key West parasailing. You will ride nearly 600 feet above the island’s clear blue waters, get a birds-eye view, and feel the rush of ascending and descending under the power of the canopy. Attractions Key West will hook you up with highly experienced operators who use the safest, top-line parasail equipment in the industry. Single, tandem, and even triple flights are available. Parasailing is the perfect family fun activity, and is exciting for all ages. Give it a try and you will be hooked on this easy adventure sport.