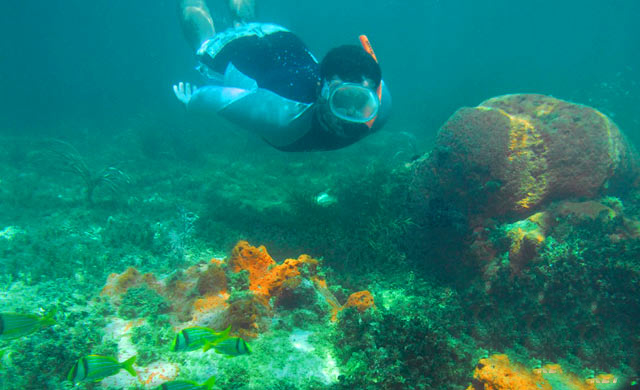 The undersea world around Key West is one of the area’s prime attractions. And beneath the clear blue waters there is an alternate world full of amazing life forms that owes its existence to a feature that is unique to Florida: the only shallow coral reef formations found along a continental US coast line.

The most prolific coral growth occurs along the seaward side of the Florida Keys, where the southern reach of the Florida Reef Tract (FRT) becomes the Florida barrier reef. The FRT stretches 358 miles from the Dry Tortugas National Park southwest of Key West up to the St. Lucie Inlet in Martin County. Patch reef formations appear beginning in the shallow waters off the Palm Beaches to the north, then the barrier reef portion of the FRT extends south from the waters of Biscayne Bay nearly 150 miles to the Tortugas Banks southwest of Key West. Along the Florida coast, over fifty species of coral have built the Florida Coral Reef: the only living reef system in North America, and the third largest barrier reef in the world.

The Florida coral reefs developed between 5,000 to 7,000 years ago when sea levels were high following the last Ice Age. The Keys themselves are remnants of reef systems that formed in high waters then were completely exposed when water levels dropped. As the waters gradually receded, two reef bands developed parallel to the ancient shoreline. The Florida Reef as it appears today consists of two ridges lying to the seaward of the keys across the Hawk Channel. The older reef, lying inshore closer to the Keys is now a sand ridge called the White Bank. It consists of large beds of sea grass with patch reefs scattered across it. Further out, the outer reefs lie about 6 miles offshore on the edge of the Florida Straits, where a second ridge is covered by reefs and hard banks composed of coral rubble and sand.

Coral reefs are aragonite structures that develop when colonies of small creatures called polyps extract minerals from seawater and use them to build calciferous structures that serve to house the colonies. Over time, the various types of structures accumulate to form a coral reef. Coral reefs develop only in specific marine environments. They require solid structures for attachment, clear, warm waters that are low in phosphate and nitrogen nutrients, and moderate wave action to disperse wastes and bring oxygen and plankton to the reef.

The reef formations of the Keys are generally made up of a series of ridges and channels, called a  “spur and groove” formation. The most common corals found on Florida’s reef are brain, star, elkhorn, and staghorn corals. Brain coral is so named for its rounded dome shape and waves, folds, and ridges. Star coral is dome-shaped as well, but accordian-like folds within the polyp cups create distinctive star patterns on its surface. Elkhorn and staghorn corals grow in branchlike projections that resemble the antlers of deer. In recent years, environmental factors have caused damage and decline in corals throughout the world, and in 2006, elkhorn and staghorn coral were listed as threatened under the Endangered Species Act.

A living coral reef is one of the most biologically diverse environments on earth. Many fish and animal species are specialized to live and feed exclusively among and on the corals, while other species are drawn to the reef as predators of the reef-dwellers. The reef is a colorful and amazing sight, and no two visits are the same. Ask anyone who has been lucky enough to live near a tropical sea and become a “regular” at a local reef. There is something new and interesting to be encountered every time you put on your mask and snorkel or dive gear. A chance to snorkel on a living reef system like that found off Key West and down to the Dry Tortugas is the opportunity of a lifetime and should not be missed.