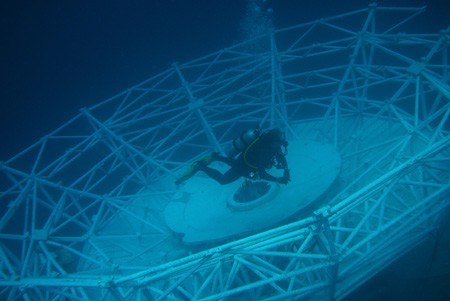 The waters around Key West offer some of the best scuba diving in the world. The protected marine environment of the Florida Keys National Marine Sanctuary, the wide range of bottom structures and water conditions, the only living coral reef systems in North America, and the very numerous wrecks and other man-made items that litter the bottom around the Keys all add up to a dive destination that can easily rival exotic locations found much farther from home.

One advantage Key West diving offers is the fact that it is hard to get skunked on a visit to the island. No matter what conditions may turn up during your stay, a good dive company will leverage the wide variety of available sites to seek out the best opportunities given weather conditions, water clarity, and the desires of the dive party. It is possible to find good diving nearly year-round in Key West, and the selection of schools and guide services on the island is excellent.

In addition, the great diversity of dive sites makes Key West ideal for dive groups of mixed experience levels. It is very easy to find a site where beginners can be working on their initial certification while more experienced divers find plenty of interesting things to see nearby. For example, within intermediate recreational depths of 30-75 feet, the Key West reef ecosystem offers chances to encounter hundreds of species of marine life including colorful tropical reef fish, eels, rays, turtles, and even larger fish such as Barracuda, Grouper, Jack Crevalle, and Cobia.

While the reef diving off Key West is really spectacular, one of the most noteworthy aspects of Key West diving is the huge number and variety of wrecks within range of the island. For example, the 520-foot long USNS General Hoyt S. Vandenberg, the largest wreck in the Keys, lies just 7 miles SSE of Key West at a depth of 140 feet.  A former US Navy and Air Force missile tracking ship, troop transport, and war ship, the Vandenberg is the second largest ship ever to have been intentionally sunk for the purpose of creating an artificial reef. The multiple deck levels and the height of the ship make it a good dive site for mixed-ability parties, with depths for beginners as well as advanced divers.

Until the Vandenberg was sunk in 2009, the 187-foot Cayman Salvager steel buoy tender was the favorite wreck dive in Key West. The hull of the Salvager, with superstructure removed, was sunk in 1985 as an artificial reef and sits at a depth of 90 feet. The superstructure was sunk separately in 55 feet of water in the Gulf, and is a great dive site itself. The Cayman Salvager is famous for its huge Goliath Groupers – some of the biggest in the Keys, with some individuals estimated at over 600 pounds. The Salvager is a great site for advanced divers, and visibility is usually exceptional there.

Another great dive lies out west of the Marquesas Islands – the 110-foot “Target Ship”. It is a cargo ship that ran aground in the 1950s and was subsequently used for target practice by the Navy for many years. Sitting in only 8 feet of water, this is an ideal introductory wreck dive for beginners, or a very interesting snorkeling spot. Visibility is good, scattered all around the wreck are various shells and bombs of different shapes and sizes, and there are plenty of fish to see as well. This wreck is home to some Goliath Groupers that have become accustomed to humans and are tame enough to swim up to for a great underwater photo opportunity.

These are just three highlights of the type of dives that Key West offers, and an example of the possibilities in the area. There are literally hundreds more wrecks, and many types of sites both natural and man-made. There are more than enough to keep a diver exploring for years, so come on down and dive Key West.